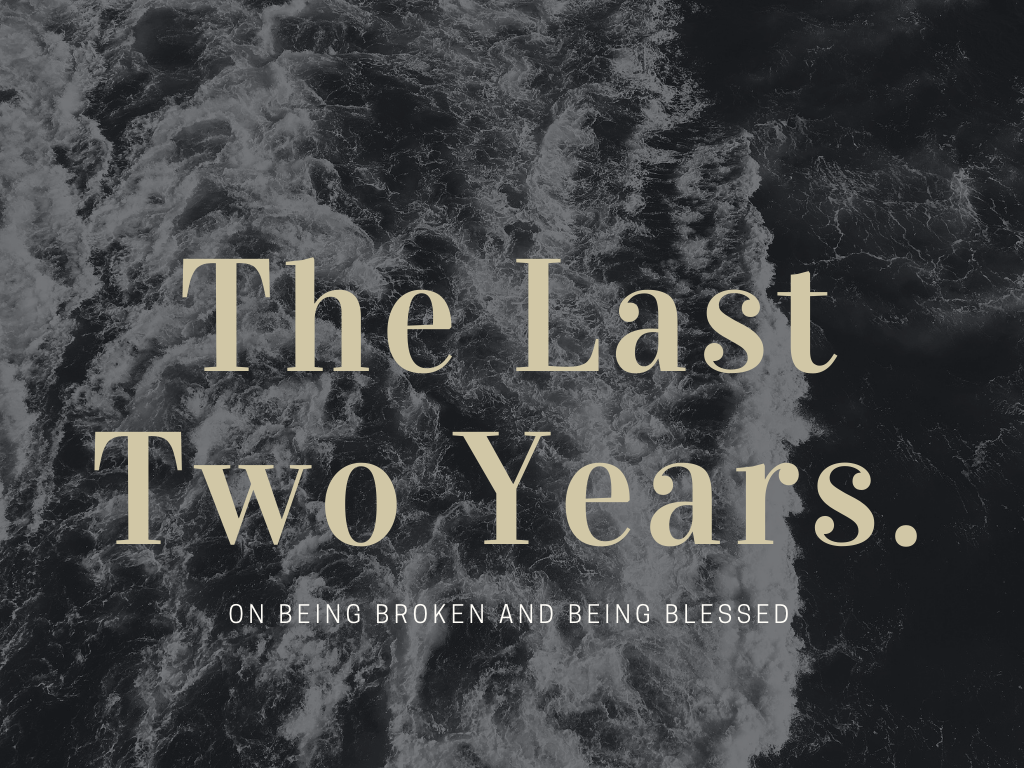 It is doubtful whether God can bless a man greatly until He has hurt him deeply – A.W. Tozer.

This has been my lived experience of the past two years. Two long, hard, years of being broken and being rebuilt, being bruised and being cared for, being humbled and relearning what it means to be truly human.

As a young Christian leader, I had a clear picture of how God would use me in His service and what a Jesus-shaped life would look like. Naturally, he would use the same traits and giftings that others so readily encouraged in me. What brought ‘success’ and glorifying God went hand-in-hand.

Fraying at the edges seems to be a good description of my interior life these last two years. Unravelled, picked and pulled apart at the seams. Sarah was the one with cancer and yet in the two years since her diagnosis, in the midst of her healing, I have often felt like the one still broken.

More than anything, this has led to an absence of writing. What do you write about on a site dedicated to stirring your affections for God when in fact your affections feel stagnant, slowed, profoundly unstirred?

I still love Jesus. It’s still Jesus. I’m still a consistent, faithful member and pastor of my church. It’s just that my faith looks less cocksure bravado and more like a concerted clinging onto Jesus, more like a deep-rooted and deeply-planted faith than one easily swayed by day-to-day emotions.

Jesus starts the Beatitudes with one of the most confronting lines imaginable to the lift-yourselves-up-by-the-bootstraps style faith I had crafted for myself as a young Christian:

‘Blessed are the poor in spirit, for theirs is the Kingdom of Heaven‘. (Matt 5:2)

Being frank, prior to breaking, I had no real need of being poor in Spirit. How terrible does that sound? How frankly un-Christian?

Thank God that God desired far more for me than I desired for myself. The mercy of God is that He would lead me down the path of brokenness in order to secure something I did not desire for myself.

The opening poem in the Valley of Vision, a collection of Puritan prayers has become somewhat of a guiding light for me in these past two years:

‘Let me learn by paradox that the way down is the way up,
That to be low is to be high,
That the broken heart is the healed heart,
That the contrite spirit is the rejoicing spirit,
That the repenting soul is the victorious soul,
That to have nothing is to possess all,
That to bear the cross is to wear the crown,
That to give is to receive,
That the valley is the place of vision.

This is the rambling, lengthy story of how I was broken and how God has made me new.

In the months after chemotherapy ended lots of people started asking a revealing question: ‘So, like, Sarah’s healed now isn’t she?‘

It’s a question with an expectant one-word answer, ‘yes’.

Life is rarely that simple.

Has the tumour and cancer gone? Yes.
Has the unnatural feeling that chaos is normal left? No.
Has the chemotherapy and frequent hospital visits slowed? Yes.
Has the emotional scars from having your life turned upside down healed? No.
Has the ambient sadness and anxiety that intermittently invades your day left? No.
Has the stress built up over months and months left our bodies? No.

What does healing look like when the sickness is gone but there is still so much to process and work through?

I remember burying myself into my work until the natural consequence of burnout took hold. Taking a test with a counsellor, he informed me that I scored highly on something called ‘depersonalisation’.

Depersonalisation is what happens when you stop seeing people as people, but rather as objects. Sounds rather horrid for a pastor, right? ‘No, I don’t think you see other people as objects. I think you see yourself that way’ says the counsellor. Excellent.

I remember the moments texting friends bailing on events or rides or class last minute because I couldn’t bring myself out of bed, racked with anxiety and sadness.

I remember bailing out of haircuts because I couldn’t stand being in the barber, alone.

I remember the many, many times I said to Sarah, ‘I don’t feel like myself anymore’.

I remember being afraid to tell anyone.

In March 2019, I participated in one of the hardest one-day cycling events in the world: 3 Peaks Falls Creek Challenge.

Starting at the top of Falls Creek, it follows a 240km circuit around Alpine Victoria, taking in the (three) peaks of Tawonga Gap, Mt. Hotham and the back end of Falls Creek in an excruciating route. It was also the moment where the carefully curated inner life I spent the last 18 months holding together fell apart.

Climbing up Mt. Hotham was close to the worst experience of my life. In the midst of a close-to three-hour ascent, I had near to a mental breakdown. The physical exhaustion of my body broke down the mental walls that had allowed my mind to focus on other things.

If you ask any real cyclist what the best part of cycling, they’ll tell you honestly, it’s the suffering. There is a clear space in the midst of pain that is free of distraction, where the only company is the rhythm of your (rapid) heartbeat and breath.

This was the opposite of that.

There was no pure space, no distillation of thought but rather a constant experience of imagining every single significant person in my life describing what an utter, abject, complete failure I was.

That was when the defences finally came down. Not only was I physically broken, but emotionally, I was done.

It was time to listen.

I started to open up to people. I invited a coach into my ‘stuff’. I started seeing a psychologist. I felt naked a lot. Seen for the first time, really.

John Calvin starts the Institutes of Christian Religion with an opening sentence I contemplated a lot: ‘Nearly all the wisdom we possess, that is to say, true and sound wisdom, consists of two parts: the knowledge of God and of ourselves.’

I had to come to terms with the fact I didn’t know myself very well at all and perhaps I did not know God as well as I would like. Suffering tends to reveal not only what you worship and treasure but who you really are beneath the surface.

Calvin goes on to write that knowing ourselves is vital because from of the feelings of ‘ignorance, vanity, poverty and infirmity’ we can recognise that the ‘full abundance of every good and purity of righteousness rests in the Lord alone’.

Knowing ourselves is important because we only begin to seek after God when we ‘begin to become displeased with ourselves’.

I had spent so many years being ‘pleased’ with myself that this was a rather horrid experience.

When I was nineteen years, a mentor instructed me that it would be helpful for my walk with Jesus if I could learn as much as I could about one faithful Christian from history. I chose Charles Haddon Spurgeon.

There are many reasons to fill my life with much of Spurgeon, many of them to do with his success. He possessed a spirit-filled zeal, endlessly quotable, a successful pastor at a young age where hundreds became faithful Christians under his preaching and leadership.

What I discovered along the way was that Spurgeon was a man who knew what it was to be brought low, to be broken. One of the most helpful things he wrote, ‘The Ministers Fainting Fits‘, he wrote about spiritual sadness. He writes:

I thought it might be consolatory to some of my brethren if I gave my thoughts thereon, that younger men might not fancy that some strange thing had happened to them when they became for a season possessed by melancholy; and that sadder men might know that one upon whom the sun has shone right joyously did not always walk in the light.

Spurgeon came to the conclusion that those who never have to push through waves of difficulty never grow in strength and maturity like those who do. He writes again:

The scouring of the vessel has fitted it for the Master’s use.. The wilderness is the way to Canaan. The low valley leads to the towering mountain. Defeat prepares for victory. The raven is sent forth before the dove. The darkest hour of the night precedes the day-dawn.

The scouring of this vessel has fitted it for the Master’s use.

These words have been of immeasurable comfort.

The last two years have changed me, but if I was being honest, it was needed change.

The most devastating revelation that I’ve had to come to terms with is that in part this has occurred because there are significant ways that I have tried to progress without the presence of God.

What cancer and the subsequent two years has done was shine a light onto all the ways that I am content to progress without God himself. These years have been more evidence of grace to me that even in pain and difficulty and brokenness that he will not let me progress without his presence.

I’ve become slower to speak, quicker to listen. Starting to slow down rather than view out-of-control pace as the only option. Seeing that God broke me apart only to bring me more in line with his Kingdom.

I’ve reflected a lot on some words that Stephen McAlpine wrote upon finishing up as a senior pastor last year:

‘The opposite of a broken leader is not a whole leader, but a brittle leader.  Broken leaders are broken down by God and built back up again, first in order to be humbled from their pride, but second, to make them safe people for the flock of Christ to be around.  A brittle leader is a nightmare.  Having never been broken, a brittle leader works the angles, avoids the self-examination, gets chippy with opposition, either fears what others think, or steamrollers over the top of what others think.  Why?  Because they fear being broken.  Hence they remain brittle.

And again, this week

‘It’s good to be a broken leader. It means you won’t break other people. Jesus came for the sick, not the well, and perhaps I was sicker than I had ever thought, even before I became ill’.

This has been true for me. Although Sarah was the one with cancer, I too, was sick. God cared enough for me that he not only broke me but cared for me in my breaking.

‘Let me learn by paradox that the way down is the way up,
That to be low is to be high,
That the broken heart is the healed heart,
That the contrite spirit is the rejoicing spirit,
That the repenting soul is the victorious soul,
That to have nothing is to possess all,
That to bear the cross is to wear the crown,
That to give is to receive,
That the valley is the place of vision.

Jimmy founded Stirring our Affections in 2016 | Married to Sarah, Pastor in Melbourne and eternally loved and satisfied by Christ

Jimmy founded Stirring our Affections in 2016 | Married to Sarah, Pastor in Melbourne and eternally loved and satisfied by Christ